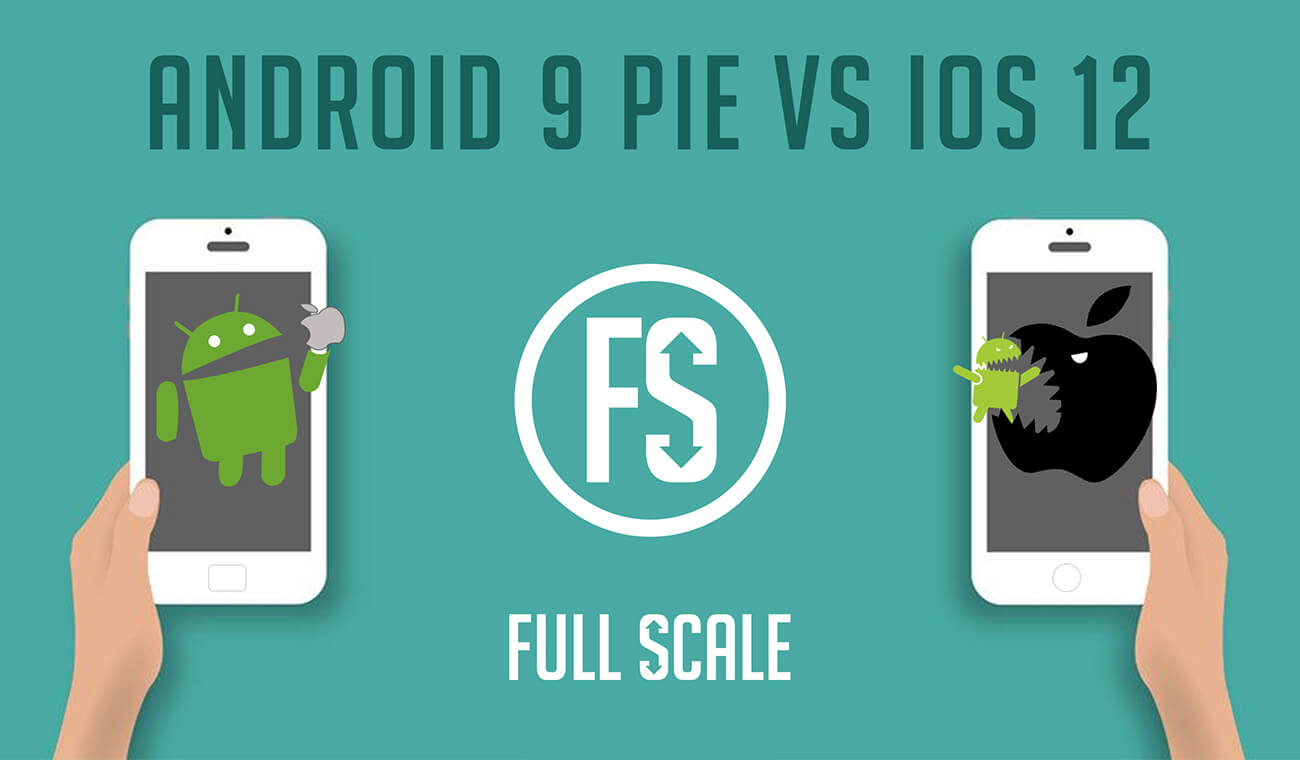 To get ahead of the competition, a startup has to be up-to-date with the latest technological advancements. If you’re building a mobile app, you need to consider the kind of market you’re trying to reach and what operating system they’re using. Read on and find out the pros and cons of the latest Android and iOS releases. And if you also don’t know where to get the resources to help you build your app, find it here at Full Scale.

Whether you’re an avid Android or iOS user, the fact remains that each OS offers both similar and exclusive features that people will appreciate. With Android Pie and iOS 12, the battle will only intensify until the next new update kicks in.

Google’s Android 9 Pie is the official operating system for its exclusive devices such as the Pixel brand. Generally, Google names its mobile OS after desserts such as Gingerbread, Froyo, Ice Cream Sandwich, Jellybean, KitKat, Marshmallow and Oreo. So, it doesn’t come as a surprise why they chose to name it Pie to sweeten up the list.

With Apple’s iOS 12, it focuses on performance and system optimization, along with other cool features like Memoji, Group FaceTime, Screen Time and many others. Apple distributes these improvements on old and new devices, making iPhones and iPads faster and more responsive.

Since the market matures far too quickly and users tend to stay contented with their devices longer, there’s growing demand to ensure that the latest software update runs smoothly on old devices as well as the new ones. This article will walk you through the two OS versions based on different criteria like performance, security, multitasking, and many others.

Google Android Pie vs. Apple iOS – Which is Better?

In terms of performance and updates, both Google and Apple had the major updates covered in their own operating system. That means that what you can do in one, you can most likely do in the other. However, the major point to consider is its performance and efficiency, especially on older devices.

Google revealed an initiative known as Project Treble in 2017 as part of the Android 8 Oreo update. The aim was to make update rollout faster on devices–an obvious answer to Android’s notorious reputation for slow update releases. Project Treble solves this problem by separating the Android OS Framework from the UI changes and customizations that phone vendors make. What this means is that updates can roll out quickly and frequently regardless of who manufactured the phone without compromising any device-specific features.

Apple revolves its efforts around making sure that iOS 12 doesn’t slow down older models. This is after they received backlash on their previous updates that apparently bogged down old devices. In addition, more iPhone and iPad devices support iOS 12 than any of the previous iOS releases, as far back as the iPhone 5s and iPad Air.

With Android Pie, users have more control over what appears on their lock screen. Notification settings are more detailed on all Android devices, allowing you to customize the experience to your preference. However, users may want to tweak the notification settings on each app.

Google made the notification experience on Android much smarter and better. Not only has the notification harbored a design transformation, but users can also disable notifications right within the notification itself. Additionally, you have access to smart replies (similar to the Smart Reply in Gmail). You can also have conversations and view notifications without opening the app. Android Pie delivers a new feature known as Shush which allows you to activate the ‘do not disturb’ feature. It’s perfect for when you don’t want to be bothered with notifications when in a meeting or social event.

Apple iOS ‘Do Not Disturb’ option sets the device for optimum nighttime viewing as graphics and sounds are subdued for lesser distractions. You can set the ‘Do Not Disturb’ schedule to suit the time and place you’re in.

When iOS 11 came out, it released a great multitasking feature for iPads. It allows users to run two apps simultaneously–drag and drop files between two windows, or watch videos while running other apps in the background. Unfortunately, this feature is not available on the iPhone.

As for Android Pie, this mobile OS allows you to run two apps on both smartphones and tablets. You can connect some devices to a keyboard, mouse, and monitor, giving you that desktop productivity experience wherever you go.

Google has come full circle with its gesture control on Android Pie. This mobile OS has a new navigation design that incorporates a slim, pill-shaped bar that serves as the home button. A quick swipe up from the bottom of the screen displays the recent apps used while swiping further all the way to the top can bring up the entire app drawer, even if you’re not on the home screen.

In the recent apps screen, it includes app suggestions in a dock powered by machine learning and Google Assistant. You can slide the bar from left to right to run through the previous apps. The old back button is still there, although it only shows up when you have a page to go back to, so you’ll never see on the home screen.

iPhone X introduced an era of intuitive gesture navigation. It has simple swipes that let you navigate around your phone without taking as much screen space as older models. Apple is bringing this new feature to the iPad.

Users have the capability to go back to the home screen with their iPads by swiping anywhere on the dock. You can access the Control Center on the top right corner. These features are not available on older iPhones as these handsets don’t have iPhone X’s expansive screen design, however, iPad users can definitely enjoy this one.

Android Pie has a new biometrics API that’s just as useful as the Apple Face ID. Users can unlock their phones, access apps and authorize purchases by simply facing their phone screen, as long as it has the facial recognition or iris scanning capabilities. Some smartphone models are imitating iPhone X’s Animoji technology. Google has not worked on creating an Animoji-like feature in Android Pie, but manufacturers like Samsung have their own version.

The latest iPhones no longer use fingerprint scanning. Instead, they use Face ID, a facial recognition system present on all iPhones without the Home button. Face ID allows you to unlock the device and authenticate purchases on the App Store. With iOS 12, you can create multiple Face IDs or for two people. This is great if you want to share iDevice with others.

For both Android P and iOS 12, you will find Machine Learning as the silent backbone in some of the innovative mobile OS features. Android P has search bar suggestions called ‘Slices’. These are comprehensive search results that conform to your installed apps. So, when you type in “Lyft” on your phone’s Google search bar, you can see a result that displays the charge for the ride to a certain location right on the search.

iOS 12 introduced to Siri two new services, Suggestions and Shortcuts. Siri learns the patterns and routines, then offers suggestions based on its observations. So, if Siri notices that you order your caramel latte at work, it can send a notification that asks you to make an order before you travel to work. If these suggestions are helpful to you, you can lock them to Shortcuts, a new feature designed to let you create predetermined actions that can carry out complex tasks within a few seconds. You have the option to add or delete steps on Shortcut or download premade templates.

In Android, ARCore still lacks many practical use cases, especially on a small number of devices that supports it. Even if your phone is ARCore-supported, you won’t find that many AR apps on the Google Play Store.

Apple, on the other hand, is focusing heavily on ARKit, its flagship augmented reality technology. iOS allows all types of apps that let your device engage with the real world. The App Store has a rising catalog of AR apps. iOS 12 introduced its first augmented reality app Measure. As the name suggests, it helps you measure objects in the real world by pointing the camera at them.

Some people might find it surprising that Google and Apple want to help us keep track of and reduce our smartphone usage. Google has Digital Wellbeing, a feature available on all Pixel phones running on Android 9 Pie, as well as Android One handsets. This app monitors how long you’ve spent on different apps, limits usage and minimizes notifications. Wind Down is a feature that reduces notifications before bedtime by changing the display to grayscale.

On iOS 12, you have daily and weekly reports on your device usage and can set limits to prevent you from wasting time on your phone. App Limit is a feature that sets a maximum amount of time that you can spend on an app per day. Once exceeded, the screen display will turn white and suggest for you to do something productive. However, you can actually bypass this one. Downtime is another helpful feature that blocks the device from use during a specific time of the day. This is designed for parents who may want to regulate their kid’s smartphone habits.

Google has taken major steps to protect all Android users against malware and privacy breaches. They now scan apps before installing them to make sure that they’re safe and secure. Android 9 Pie has encrypted data backups and shields all data transmissions with Transport Layer Security (TLS). It’s also the first OS that supports secure transactions through Protected Confirmation APIs.

iOS 12 brings robust security features to iPhones and iPads. It made some improvements to how passwords are managed. iOS can auto-fill passwords through third-party password managers like Dashlane, LastPass, 1Password, etc. If logging into a website, you will see a suggested password on the bar above the keyboard. You’ll need to authenticate your device with your Face ID or Touch ID. It also supports built-in Two-Factor Authentication (2FA) to secure your Apple account, USB restricted mode, controls location tracking, and prevents social media apps from tracking users’ browsing habits.

All these great updates in Android 9 Pie and iOS 12 are proof that Google and Apple are stepping up their game to make the user experience better. Each of them has its specific advantages that will depend on the person’s preference or what they find valuable. This competition is great to have between OS giants because it encourages these companies to innovate their products, making them faster, simpler, and more secure. It helps to learn more about how differently Android and iOS are developed to better understand the impact of these releases.

Now back to you, which one do you like better? Let us know your thoughts.

Want to build your own mobile app?

Full Scale is an offshore web development firm that helps local businesses in Kansas City and beyond to grow their development teams. If you’re looking to hire web developers for your business, make sure to get your free consultation with us today.