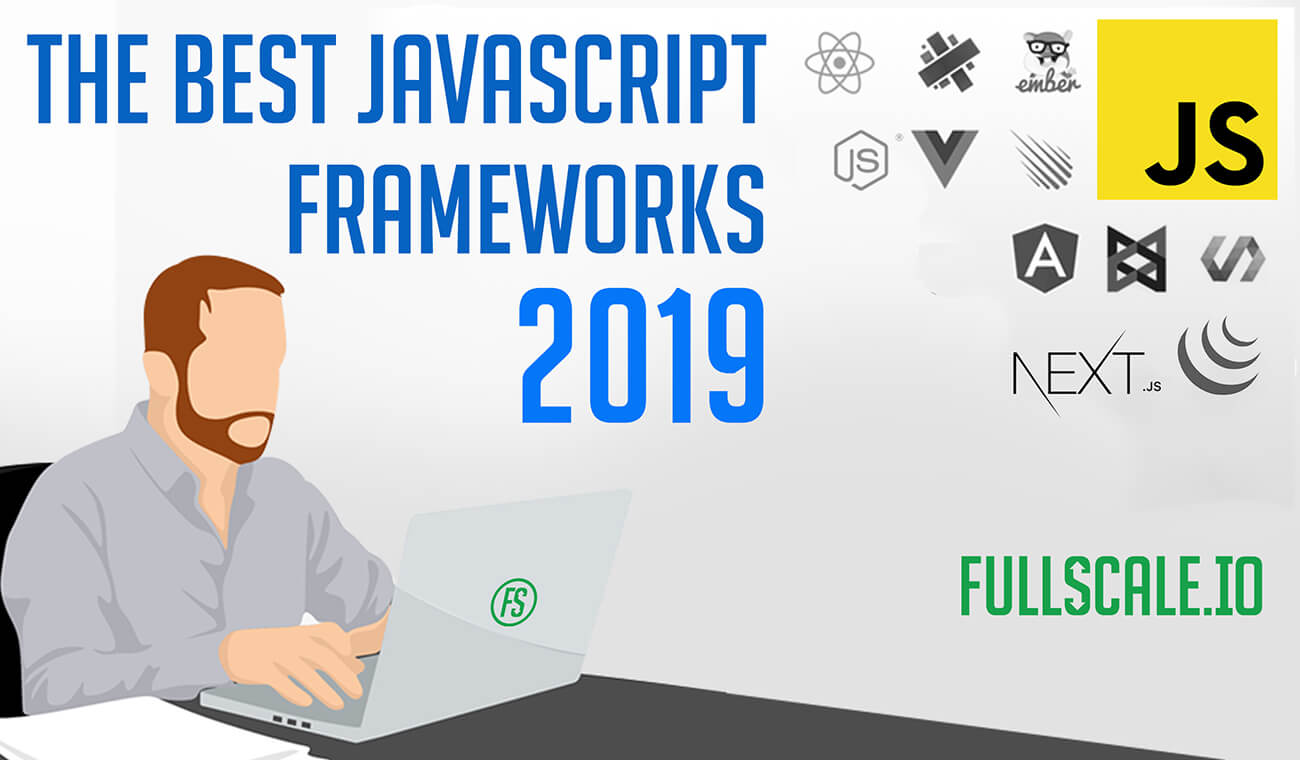 It is important to choose a framework that is not solely reliant with the requirements during development but also how it works in the long run. JavaScript as a language of the Web is a client-side programming language that creates dynamic and interactive pages. It works on the vast majority of browsers and devices. To compensate for the server-side demand, pure JS is paired with Node.js. Thus, it became a server-side programming language, and cross-platform engines use it to cater to the demand of the market.

In the succeeding sections, we will discuss the best JavaScript frameworks, libraries and tools, and its business advantages to help entrepreneurs assess on what to use. This is an assurance that here at Full Scale, we always heed to the success of our clients, finding resources, with the right people working expertly with the right frameworks.

AngularJS is known to be the “all-in-one” framework because of its capability to create scalable applications. It has earned a good reputation among the large community of developers. It is primarily maintained by a team at Google that provides updates and the latest versions.

It requires minimal coding since it uses TypeScript to identify the errors easily. Due to its quality of documentation, developers have strong plug-in and community support. Its two-way data-binding enhances testing capability and helps to simplify the development through identification of controls between the model and view.

Angular and its business advantages:

Ember.js is based on a Model-View-ViewModel (MVVM) pattern. It is not only designed for single-page web applications but also for desktop and mobile applications. Unlike some of the other frameworks, it has backward compatibility with its previous versions. Various companies and industries use Ember as their platform. Apple Music uses this framework for its desktop app.

Ember and its business advantages:

Vue.js is one of the most popular JavaScript frameworks for creating user interfaces and sophisticated single-page applications. It focuses on integrating other libraries and reusing existing projects. It has a simple syntax which uses a combination of the functional and OOP approach. It has an almost similar but enhanced coding style with Angular. It has good documentation and is suitable for applications that needs constant or real-time updates.

Vue and its business advantages:

Next.js is a framework known as “meta-framework for universal applications” since it aims to give the user the capability to create web views utilizing Vue.js in single file component system. This provides capability for both client and server-side rendering.

Next and its business advantages:

Aurelia.js was released in 2016 and it enables the creation of web, mobile, and desktop applications. This framework is based on the MVC and MVVM patterns using mutable conventions. Coding using Aurelia is easy since most developers have created templates. Also, this framework supports alternative syntax in TypeScript and CoffeeScript.

Aurelia and its business advantages:

MeteorJS is a JavaScript framework which is best designed to create real-time updates. It was first introduced on January 20, 2012, under the name Skybreak. It’s best described as fast and easy and good for applications that have specific goals. It is implemented using the MVC pattern where it speeds up the development in Mobile and Web applications.

Meteor and its business advantages:

jQuery is one of the most used and favorable Javascript libraries. It has the most useful features such as event handling and effects and animations. This is the most favorable library in JavaScript since most users like using its interactive features. When it comes to performance in a complex application, jQuery might be slow due to the browser-side transitions for animations.

React is a JavaScript UI library and was developed and made popular by Facebook. Most companies such as Facebook, Netflix, Instagram, and Uber use React in their platform. React is referred to as a framework primarily because it acts as a framework most of the time. Technically, it does a lot of things that a framework does directly or indirectly. Indirect usage requires additional add-ons and packages for React to work.

With the aid of the Virtual Document Object Model (DOM), React makes it easier and faster in building dynamic UI. This approach is very efficient in real-time applications, and it uses hot reloading to make performance even faster. React uses downward data binding where data flows in only one direction. Code is more simple and stable in that approach. Most of all, it is SEO friendly technology.

React reached outside web development with React Native, React Windows and Next. React native is a framework for iOS and Android development. It is a combination of native and JavaScript UI development.

Polymer.js is a library for creating web applications using Web Components. This library has been used by many players on the Web such as Youtube, Google I/O, Netflix, and many others.

Backbone.js is a JavaScript library with model-view-presenter (MVP) design pattern. One of the best features of Backbone is that it is designed to be lightweight with the aid of RESTful JSON interfaces.

Node.js is quite an interesting technology. Unlike most JavaScript frameworks and tools which are focused on client-side development, Node focuses on the server-side. One interesting fact about Node.js is that it is NOT a framework but a runtime environment. It is not made with JavaScript but is written mainly using the C++ and C programming languages.

It is easy to learn for those familiar with JavaScript. NodeJS has the ability to be used as a single programming language since it can be used in both back-end and front-end development. NodeJS has the capability to have simultaneous requests since it offers a non-blocking I/O system. It can handle concurrent requests better which makes the application more efficient and have better performance.

Entrepreneurs can be overwhelmed with the surfeit of frameworks from the JavaScript language but keep in mind that these frameworks have their strengths and weaknesses. We can’t simply say that one is better than the other. Choosing which framework to use will always depend on the type of application being built and the expertise and skills of the developers implementing it.

Full Scale can help you narrow down your choices and provides highly skilled JavaScript developers. We are an offshore company that caters services in web and mobile development. Full Scale can provide highly skilled people specializing in JavaScript, PHP, .NET, Java, Python, Android, and iOS development. If you are looking forward to progress and be successful in your business, contact us for a free consultation.

Like
Java and C# Developers for Hire
Social Media for Business